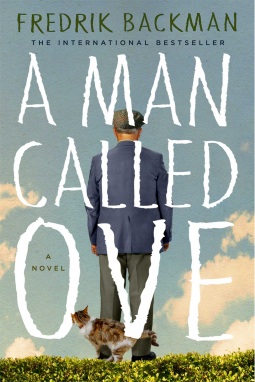 ‘In this bestselling and delightfully quirky debut novel from Sweden, a grumpy yet loveable man finds his solitary world turned on its head when a boisterous young family moves in next door.

Meet Ove. He’s a curmudgeon—the kind of man who points at people he dislikes as if they were burglars caught outside his bedroom window. He has staunch principles, strict routines, and a short fuse. People call him “the bitter neighbor from hell.” But must Ove be bitter just because he doesn’t walk around with a smile plastered to his face all the time?

Behind the cranky exterior there is a story and a sadness. So when one November morning a chatty young couple with two chatty young daughters move in next door and accidentally flatten Ove’s mailbox, it is the lead-in to a comical and heartwarming tale of unkempt cats, unexpected friendship, and the ancient art of backing up a U-Haul. All of which will change one cranky old man and a local residents’ association to their very foundations.

A feel-good story in the spirit of The Unlikely Pilgrimage of Harold Fry and Major Pettigrew’s Last Stand, Fredrik Backman’s novel about the angry old man next door is a thoughtful and charming exploration of the profound impact one life has on countless others.’

Quirky character got me interested in this book. And Ove is quirky! And I absolutely loved him! Ove is pronounced ‘uu’-ve the uu sounds like the u in rule and the ve like vay. I looked it up! Go here and hear it pronounced, click on the little blue triangle.

The writing is wonderful, the characters excellent. I felt like I knew the whole neighborhood by the end of the book and I hated it to end. I hate to give too much away, but Ove is trying to commit suicide throughout the whole book and he is constantly interrupted, by his neighbors whom he really wants nothing to do with, and a stray cat that seems to have adopted him. Such a serious matter and yet so very funny. I laughed out loud, a lot. Lots of tender moments to that bring you to tears.

Get a taste of Ove:

”After this, he detoured through the guest parking area, where cars could only be left for up to twenty-four hours. Carefully he noted down all the registration numbers in the little pad he kept in his jacket pocket, and then compared these to the registrations he had noted down the day before. On occasions when the same registration numbers turned up in Ove’s notepad, Ove would go home and call the Vehicle Licensing Authority to retrieve the vehicle owner’s details, after which he’d call up the latter and inform him that he was a useless bloody imbecile who couldn’t even read signs. Ove didn’t really care who was parked in the guest parking area, of course. But it was a question of principle. If it said twenty-four hours on the sign, that’s how long you were allowed to stay. What would it be like if everyone just parked wherever they liked? It would be chaos. There’d be cars bloody everywhere.”

I liked the way the author describes things:

‘He had never heard anything quite as amazing as that voice. She talked as if she was continuously on the verge of breaking into giggles. and when she giggled she sounded the way Ove imagined champagne bubbles would have sounded if they were capable of laughter.”

“Ove stands there with his hands in his pockets. The cat beside him looks as if it would do the same, if it had pockets.”

“On the other hand he tried to point out to her that she shouldn’t give money to the beggars in the street, as they’d only buy schnapps with it. But she kept doing it. “They can do what they like with the money,’ she said.

When Ove protested she just smiled and took his big hands in hers and kissed them, explaining that when a person gives to another person it’s not just the receiver who’s blessed. It’s the giver.”

“He knew better than to speak ill of what she loved; after all he understood very keenly how it was to receive her love when no one else could understand why he was worthy of it.”

A beautiful, funny tale of loss, love and reconciliation. I hope you get a chance to read it and fall in love with Ove too. We can all learn a lot from him.

5 thoughts on “A Man Called Ove by Fredrik Backman”

I am not afraid of storms, for I am learning how to sail my ship.      ~Louisa May Alcott