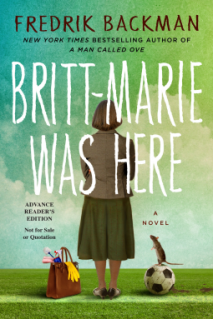 From the bestselling author of the “charming debut” (People) A Man Called Ove and My Grandmother Asked Me to Tell You She’s Sorry, a heartwarming and hilarious story of a reluctant outsider who transforms a tiny village and a woman who finds love and second chances in the unlikeliest of places.
Britt-Marie can’t stand mess. She eats dinner at precisely the right time and starts her day at six in the morning because only lunatics wake up later than that. And she is not passive-aggressive. Not in the least. It’s just that sometimes people interpret her helpful suggestions as criticisms, which is certainly not her intention.
But at sixty-three, Britt-Marie has had enough. She finally walks out on her loveless forty-year marriage and finds a job in the only place she can: Borg, a small, derelict town devastated by the financial crisis. For the fastidious Britt-Marie, this new world of noisy children, muddy floors, and a roommate who is a rat (literally), is a hard adjustment.
As for the citizens of Borg, with everything that they know crumbling around them, the only thing that they have left to hold onto is something Britt-Marie absolutely loathes: their love of soccer. When the village’s youth team becomes desperate for a coach, they set their sights on her. She’s the least likely candidate, but their need is obvious and there is no one else to do it.
Thus begins a beautiful and unlikely partnership. In her new role as reluctant mentor to these lost young boys and girls, Britt-Marie soon finds herself becoming increasingly vital to the community. And even more surprisingly, she is the object of romantic desire for a friendly and handsome local policeman named Sven. In this world of oddballs and misfits, can Britt-Marie finally find a place where she belongs?
Zany and full-of-heart, Britt-Marie Was Here is a novel about love and second chances, and about the unexpected friendships we make that teach us who we really are and the things we are capable of doing.

Another wonderful tale from Fredrik Backman! Britt-Marie was a minor character in My Grandmother Asked Me to Tell You She’s Sorry and got front and center in this book. She is a wonderful character! Backman’s characters are quite quirky, but he nails human nature on the head.

The only thing I didn’t care for in this book was Mr. Backman had to make the seemingly obligatory nod to homosexuality/bisexuality. I’m really tired of that. It was only briefly mentioned and not explored in the character at all or any kind of an integral part of the story. It showed up for what it is ‘political correctness’ or whatever you call it. Disappointed at that.

A Backman book is like receiving a gift, a real gem. If you haven’t read one yet, WHAT ARE YOU WAITING FOR?

You can purchase this book…
Book Depository
Simon & Schuster  (Official Publishers Website)
Amazon US
I received this book through Netgalley in exchange for my honest opinion!
Peggy Ann

7 thoughts on “Britt-Marie Was Here by Fredrik Backman”

I am not afraid of storms, for I am learning how to sail my ship.      ~Louisa May Alcott