The Bossman just finished a really big job on the house. Painted the basement walls and floor, put in a light over my washing machine and made three sets of shelves for the basement and three for the garage while he was at it. He even let me help paint the shelves! Wouldn’t let me near the basement though ;( It was such a big job because there was so much stuff in it! He did it in sections moving stuff around as he went. It’s a joy to go down there now, so nice and fresh and clean! There is still an old table down there with lots of hand tools and doodads on it that has to go. We have a lovely old sturdy table the previous owners left that we’ve painted and it will go where the ‘tool table’ is now. It’s perfect for doing puzzles or folding clothes on!

He even got his garage , we had put in last fall, pretty well sorted with all the new shelves. Now we just have to get the electrician out to run electricity to it and have the concrete laid beside it and the parking pad area done in front of it.

Before and after pics… 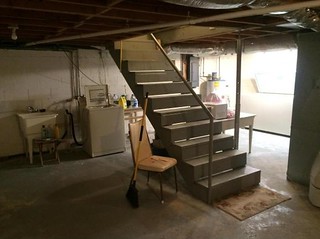 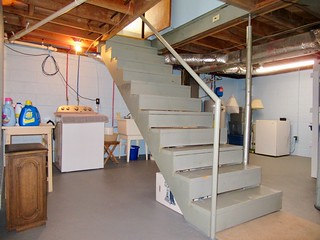 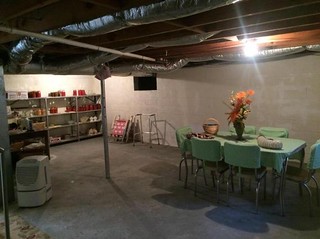 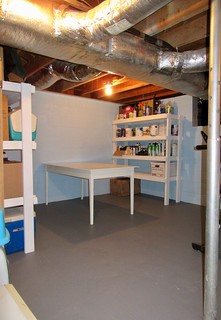 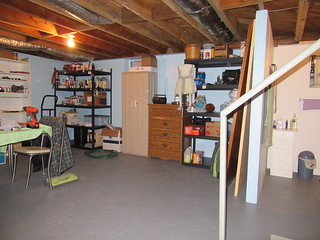 You can see the shower room to the far right in the one above. You can check out the before and after on that HERE! 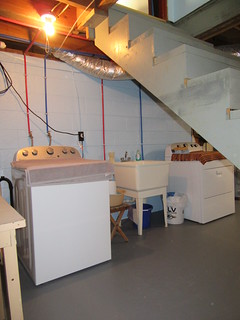 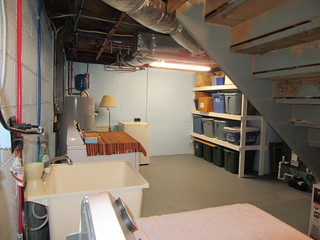 To paint the walls and ceiling above the steps going down into the basement he had to make a platform to stand on. I meant to get a pic of him standing on it painting but I didn’t get around to it in time and he was tearing it down when I grabbed the camera to take the pi 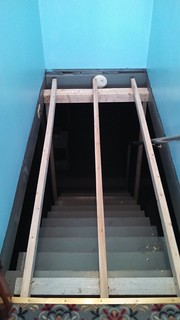 c, but you’ll get the idea. It’s just the frame, he had a sheet of plywood laid on the frame and a chair on the plywood and he stood on the chair and painted up high.

He said its the same blue as the walls but it looks so different in the enclosed area. Must be the lighting! I think I would have preferred white up there.

In the ‘before picture’ with the green table and chairs set (which is now the ‘tool table’) you’ll notice a square opening in the wall. That goes into the crawl space. We only have basement under about 3/4 of the house. I think they ran into solid rock and decided to just stop when they were putting in the basement! 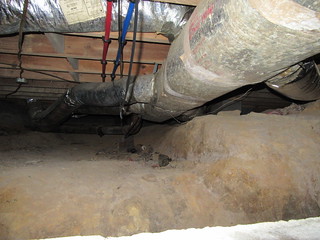 Someday I’ll get my kitchen finished and can share pictures with you of that. It still needs painted and new light fixtures. I’m thinking about hiring it done. The bathroom isn’t completely finished yet either. I live in hope! Some plumbing to be done on the bathtub/shower and wall tile to be replaced but it’s pretty well done. All the major stuff is done. I’ll take photos when the shower curtain comes in!

Any big projects going on at your house? The only other BIG project we have on the radar is a back porch of some kind. We only have a concrete pad now. Probably not until next summer though. This one looks like we’ll be gone a lot. We need to do some landscaping too. Patience is a virtue, right? 🙂

6 thoughts on “Before and After”