What a rainy dreary day in Tennessee! Can’t see the mountains for the clouds. What’s it like in your neck of the woods? We went from drought last year to double our average rainfall so far this year. That’s a good thing. I hope it won’t be a rainy summer though. The kids are coming down in July. We want to do some hiking in the Smokies while they are here.

It’s been a while since we last caught up. It’s been a bit of a crazy year here. If something could go wrong it has. There was the fiasco with my root canal (see previous porch talks). Found a new dentist and got the permanent crown on last Wednesday, only took 3 months. But that one small area of gum is still inflamed. The dentist thinks the temporary crown was causing it and it should improve with the permanent on. Almost a week and its still tender, fingers crossed! While all that was going on I had that kidney stone! NEVER want another one of those! I had to have surgery to remove it. Insurance, we don’t even want to go there! Let’s just say we had to pay way more than we should have. While the kidney stone was going on we had a trip to toledo to pick up the new camper planned and a week in Myrtle Beach coming up. No pressure! I told you how Bossman and a friend went up to get it and the nail in the tire right out of the gate. The nail pierced a band in the tire and we had to replace the tire instead of patch it. Then we had an asphalt driveway put in for the camper on the side of the house. The day after they put it in we got hit with torrential record amounts of rain for 3 days and it compromised the lower section of the driveway. First time he drove on it, it collapsed where the tires moved on it! We were sick over this. Not sure if the company would take care of it or not and it was not cheap! After three weeks of calls and waiting, they came out. They kept trying to blame the camper on it, but at the same time said they used heavy duty asphalt for the camper. They said it couldn’t be the rain. Finally they sent a crew out to ‘patch’ the sunken spots, but the head crewman said it probably was the rain and he repaved 3/4 of it. Then Bossman looked at the warranty and it said in small print ‘does not cover water damage’. I guess we did get lucky on that one. We haven’t driven on it yet and we are leaving it for a good month before we do. I’m just hoping it holds as they didn’t tear anything up to correct the foundation. Hoping the roller will have pushed it down as they added to it. 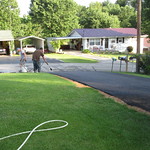 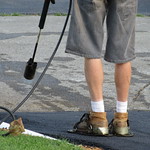 Hot shoes he uses to smooth out the asphalt!

While we were in Myrtle Beach the low brake fluid light came on. The brakes seemed fine so he filled it up and just kept checking it. When we got home he tore the brakes apart to see what might be going on and found a caliper leaking very slowly. We took it right in to the Ford dealer and had it replaced. Thank goodness for the rain today as Bossman was stuck in the house so he cleaned out his desk and found a receipt for having the brakes done less than a year ago and they replaced the calipers! He said with everything going on he didn’t even remember having it done. So back up to the Ford Dealer with our receipts to ask about that. There is a two year warranty, so we did get a refund on the one they just replaced. My oldest son just bought a house last October and then lost his job in January! Thankfully he is a saver and had three months wages in the savings and he started a new job last week. Yep, I think I should just stay in the house and work jigsaw puzzles the rest of the year 🙂 There’s this vague sense of disaster in the air, just waiting to drop.

On the other hand, we’ve had lovely visits with friends from back home this spring. Our oldest friends stopped down for two nights on their way to travel on the Natchez Trace for a couple of weeks. My best friend and her dad came down for two weeks, went to Myrtle beach with us. We went back up to the Smokies with them, her dad loves the mountains. Spent a lovely day on the NC side of the Smokies. Mingus Mill and Catalochee.  What a drive down into the Catalochee valley! Windy, curvy road, gravel half way. But we saw the elk we were promised and turkey to boot! We didn’t get to spend too much time there as it was late in the evening and we wanted to get back up the mountain road before dark. We have a date for the next time they come down. I’ll do posts on the Mill and Catalochee soon. We made one trip back up home for a few days and saw everybody. 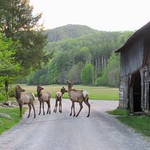 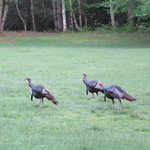 I met the wife of a co-worker of Bossman who retired too while we were in Myrtle Beach. They are retiring there. Bossman golfs with him. Terry is a reader too! We keep in touch through Goodreads. We were talking about gothic suspense novels we read when we were teens and she sent me two boxes full of Victoria Holt and Phyllis Whitney books with a few Mary Stewart for good measure. She said she was cleaning out to move and wanted them to go to a good home! Looking forward to spending time with Terry and Dave in Myrtle beach in the future.

I hit the jackpot i 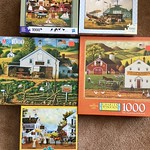 n the thrift stores in Myrtle Beach and got 4 new to me Charles Wysocki puzzles and my friend Charlotte brought me one when they visited. It’s taking every thing I have to not pull out my puzzle table and get started! But if I do that I won’t get anything else done. I have to be strong!

The first of the starling babies are at the feeders. The brown thrashers should be showing up soon. The towhees have been staying around too. A male and female. The neighbor said they have a nest in his yard. There’s a house wren nesting in a small gourd I have in the tree. The pecan tree has just been buzzing with birds feeding. We have so many rabbits this year too! There is 5 or 6 in the yard most of the time and lots of little babies running around. They are getting use to me sitting in the yard reading and get very close to me and don’t seem to be afraid. I love it, Bossman doesn’t really like so many rabbits, but we don’t have a garden. Someone in the neighborhood released their pet rabbit as they didn 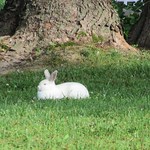 ‘t want it anymore, so we have a big white rabbit visit most days. It looks so out of place with small brown wild ones. They don’t seem to like it, I feel sorry for him/her. I call it Bunnicula! Did you read those kids books? My oldest loved the series by James Howe.

One new book arrived in the mail today, Nina Bawden’s Devil by the Sea. Ali over @ Heavenali twisted my arm! And The Butterfly Cabinet by Bernie McGill is on its way. I discovered that one @ 746 Books!

Last week I went to The Capitol Theater and saw Clue. It was one of the showings in their first Thursday of the month movie. It was a lot of fun. They had a costume contest. I was surprised how many people showed up for the move, the theater was almost full, and how many dressed as a character in the board game Clue. Mr. Mustard won! They showed old board game commercials in place of the usual trailers we see at the movies. It was fun seeing all those old board games, Mystery Date, Stop Thief, Masterpiece… Clue has quite a cult following I guess. I love it, its so funny. Have you ever seen it?

Next month they are showing the first Batman movie starring Adam West. In September they are doing a double ‘drive-in’ movie, Attack of the 50 ft. Woman and another comparable one. I remember watching those old horror movies on Saturday afternoon with my boys when they were young. I’ll definitely go to that!  Just found out today that they will be having a play in September too, Agatha Christie’s And Then There Were None! Yea! Do you like to go to plays?

Well I’ve chewed your ear for way too long and Bossman’s belly is rubbing his backbone so I better go get supper cooking. Hockey is on tonight, Nashville Predators vs Pittsburgh Penguins, our old home team against our new home team! Which will win the Stanley Cup? Who should I root for?

Thanks for stopping by!

One thought on “Porch Talk”

‘Don’t judge each day by the harvest you reap, but by the seeds that you plant.’