By Patricia Moyes  born in Dublin 1923

A U.S. Senator is found brutally murdered with a machete on the grounds of an exclusive golf club on one of the British Seaward Islands. John and Margaret Colville, who operate a modest hotel on the island, ask their friends Chief Superintendent Henry Tibbett and his wife, Emmy, to come to St. Mathew’s to conduct an investigation. Although an amiable young islander who tends bar for the Colvilles has been arrested for the crime, Henry soon discovers that the murder rests on complex motives reaching far beyond the Caribbean.

Henry Tibbett, Chief Superintendent of Scotland Yard, has for years delighted those who love a classic British detective story. A modest, self-effacing man, Tibbett possesses an almost uncanny “nose” for crime, and those who know him well realize that his gentlemanly demeanor masks a shrewd mind and a fearless spirit. When he teams up with his wife, Emmy, a cheerful but formidable woman, there isn’t a criminal anywhere who can rest secure.

My first Patricia Moyes book. I really liked the characters of Henry and his wife and think I will enjoy more of this series. I didn’t care for the setting of this one though and didn’t really like any of the other characters. Reading other reviews on this book, others commented that this was their least favorite book in the series. Leave it to me to start with it!

Not quite the ‘cozy’ I expected, it was a cross of cozy and political thriller. American politicians, lobbyists and the cotton industry tie in with the murders. Meanwhile there is political unrest on the island and curfews are set amid riots and burning buildings. Could they be connected? A well plotted mystery.

Henry had the use of a Moke to get around the island. Not sure what that was so I looked up an image of one… 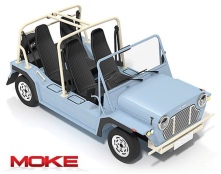 5 thoughts on “The Coconut Killings”