The Knoxville Museum of Art is not a large museum. They do have quite a few interesting pieces though. These two sculptures were my favorite pieces… 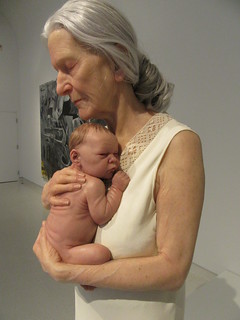 This one is by Sam Jinks from Bendigo, Australia, 1973. He lives and works in Melbourne, Australia

It’s made of silicone, silk and human hair. It is so realistic! The color in her finger tips exactly like when you are exerting pressure on something with them. You have to click on this to see it better!  Her arm is so real! You really need to click on his name above and visit his website to see his other work. 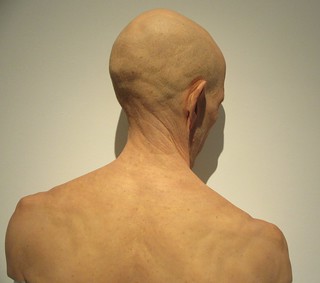 This one is by Evan Penny and is a self portrait sculpture. He was born in South Africa in 1953 and now lives in Toronto, Ontario, Canada. Working with moulded and dyed-painted silicone he implants real hair one strand at a time! The scar on the scalp, the blemishes along the back are unbelievable and the hair stubble, the creases in the skin and the muscles in the back! WOW is all I can say. You could literally stand there all day and look at this.

The Higher Ground Exhibition is devoted to East Tennessee art achievement. Many artists from outside East Tennessee came to the area between 1920-1950 in order to capture the wild beauty of the Smoky Mountains. The Smokies had long been inaccessible to all but the most intrepid, but intensive logging and the post-World War I development of mountainside resorts opened roads and trails for visitors. This period of artistic interest in the Smokies coincides with efforts to preserve this unique wilderness area, which culminated in the creation of the Great Smoky Mountains National Park in 1934.  Knoxville had a thriving art community until the mid twenties. 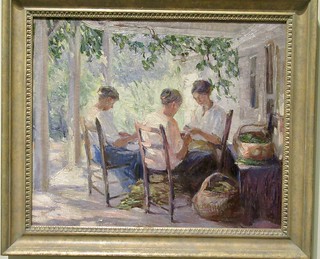 Anna Catherine Wiley  (1879-1958) from Coal Creek (now Lake City) Tennessee was a leader in the Knoxville art community. She was an impressionist. She received instruction from fellow Tennessean artist, Lloyd Branson. After the death of Branson and her father, she had a mental breakdown in 1926. She never painted again and lived the rest of her life in an institution. How sad. This is The Pea Shellers, circa 1915. I’d love to see more of her work.

Thomas Campbell (1834-1914) was born in England and immigrated to the US when he was 19 and became an ordained minister. He was a missionary to Nativ 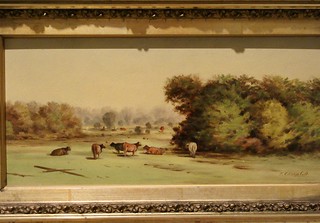 e Americans and then held church pastorates in New York and Illinois. He always had a sketch pad with him. They moved to East Tennessee in 1892. He lived in Marysville which is just south of Knoxville. After his wife died he retired and devoted himself to painting. He founded the art department at Maryville College in 1902 and headed it until his death. This is Untitled, circa 1900. I love the cows! 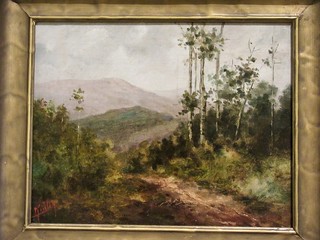 Charles Krutch (1849-1934) was born in South Carolina and moved to Knoxville with his family when he was a child. He started painting early in life and was self taught. He limited his subject matter to The Great Smoky Mountains and often hiked to remote areas and boarded with mountain families to capture backcountry vistas. This one is Study in Oils of the Mountains of East Tennessee, Circa 1916-1918 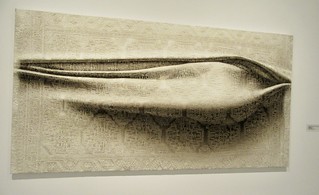 nd was so cool. I didn’t get the name and artist thought. But the talent in this is amazing. Its very hard to believe that this is a flat painting with no texture. It really looks like a three dimensional piece of cloth.

I wish I could have spent more time but we were there to specifically see the holocaust art and had to get to the Civic Center t for the conference. Another time I can browse longer. I love going to art museums, do you enjoy it? Hope you enjoyed the trip to Knoxville Museum of Art!

A Community of Classics Lovers