We have lots of baby or immature birds in the yard this last couple of weeks! I thought that happened in spring?! Seems to be two different ages of young cardinals. Thought I’d share some of them with you.

Lots of cardinals and doves… 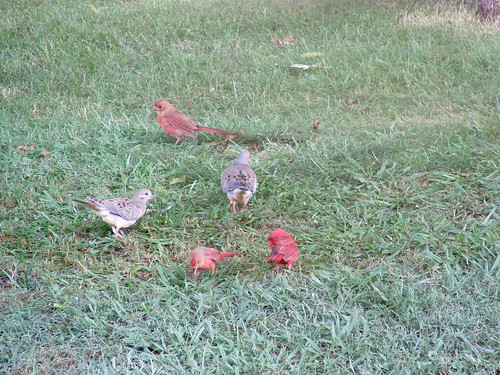 two young male cardinals and dad. one young dove to the left 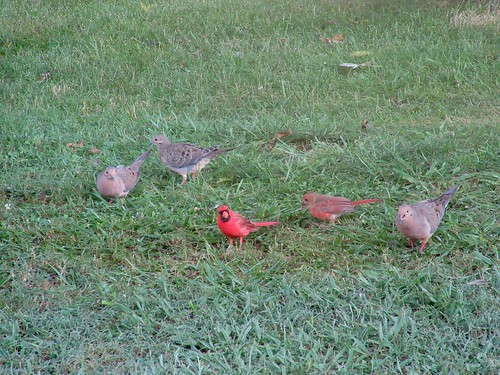 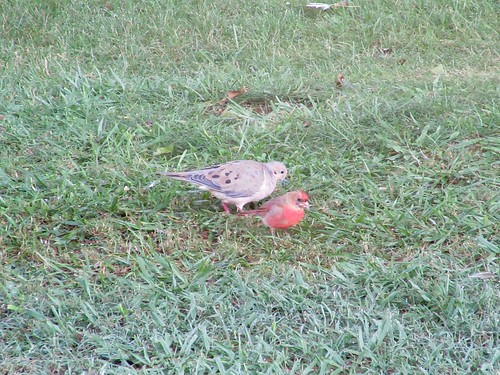 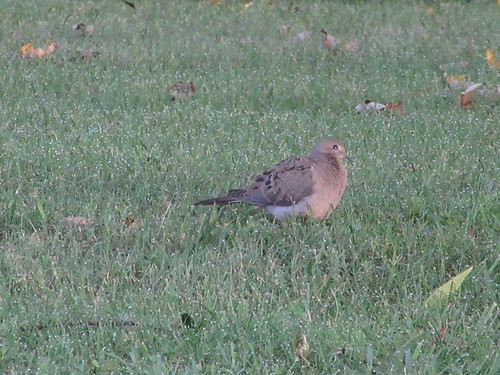 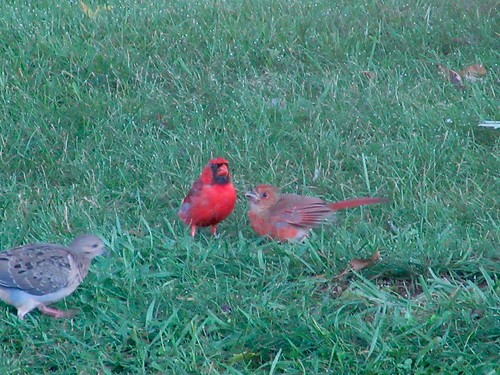 Father and son cardinal and young dove to the left 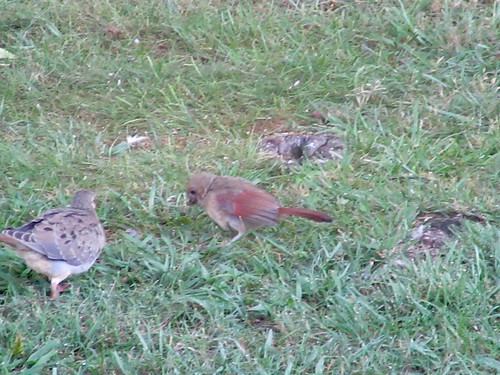 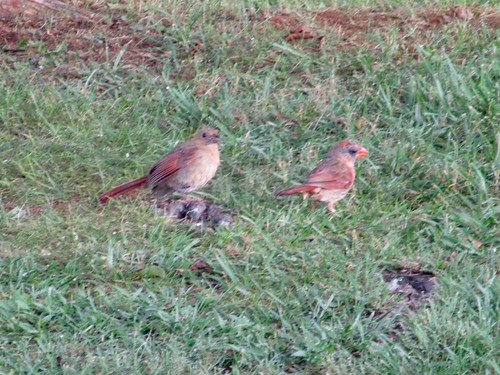 two young cardinals, thinking a male and a female 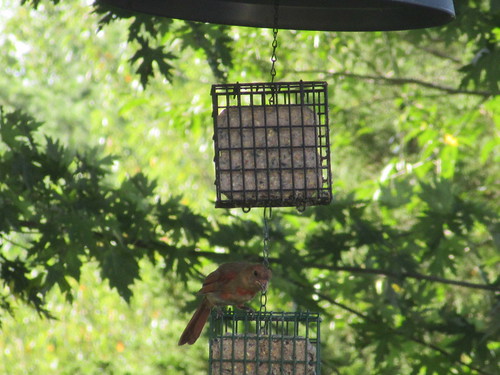 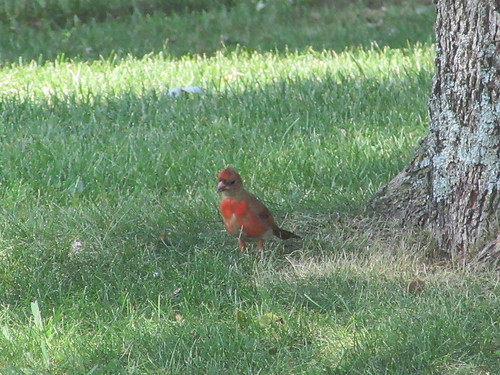 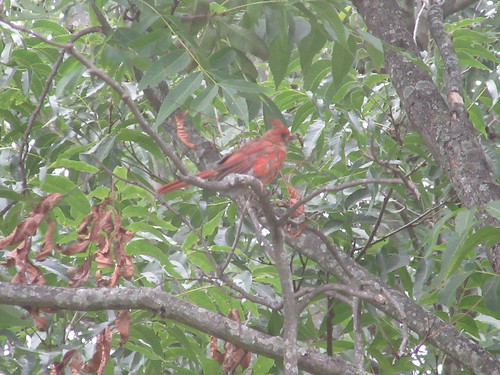 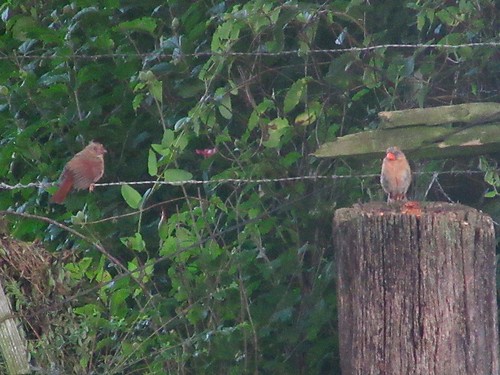 two young cardinals. notice the difference in the color of their beaks 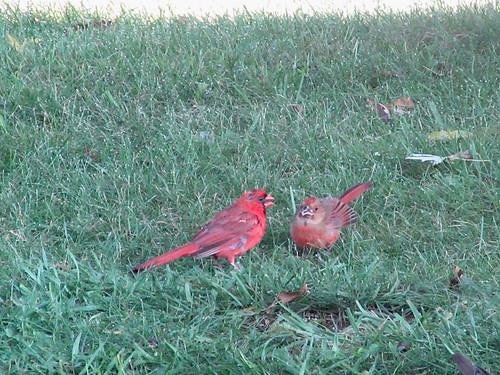 Dad has a seed in his beak for junior 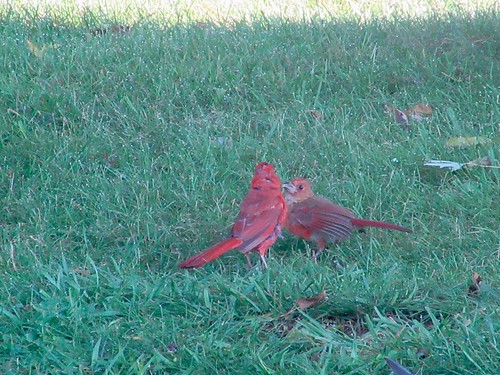 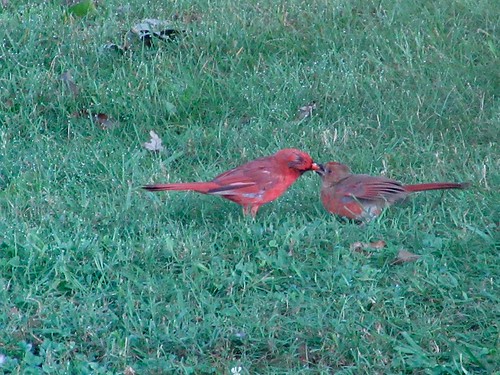 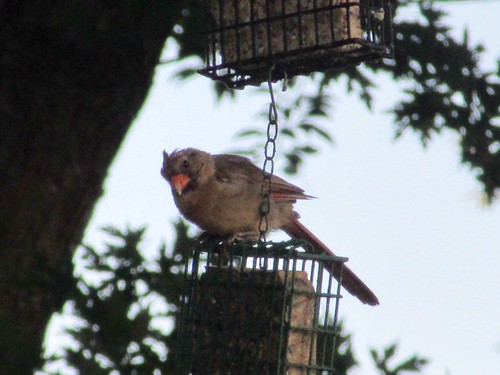 Young female, no red on her chest 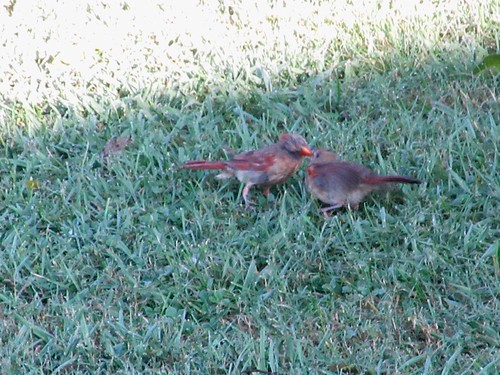 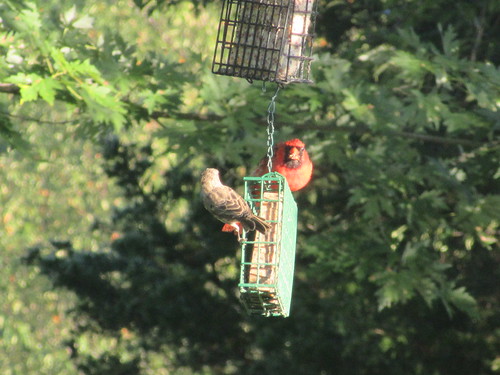 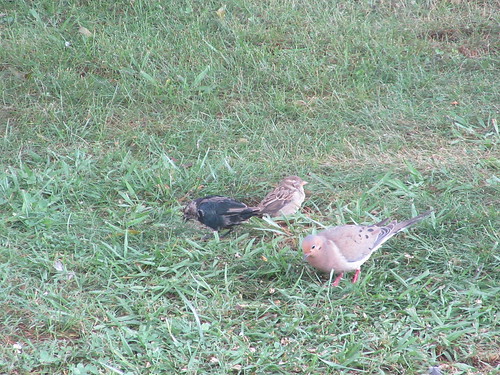 Not sure what kind of baby this is but think it is a house sparrow with the mom sitting there with it.

We’ve had a nice size flock of house sparrows hanging around the house for the last month. They’ve pretty much chased off the finches. They love the shrubs in the front of the house and mob the feeders several times a day. Sometimes when I’m sitting at the computer I look up and one is sitting on the outside window sill looking in at me. 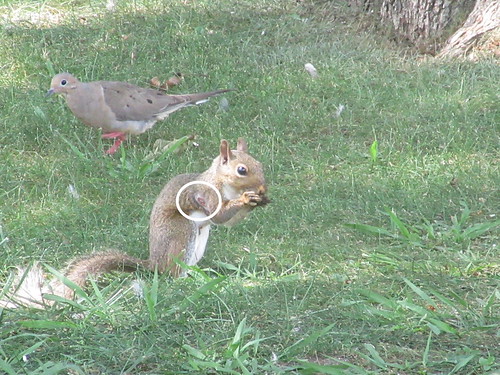 We’ve had a bumper crop of rabbits this year too! 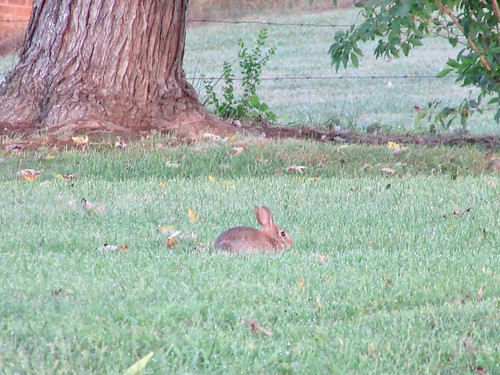 There was a young Red bellied woodpecker at the suet too but I wasn’t able to get a picture of him. I was sitting outside reading last week and a huge red shouldered hawk (pretty sure that’s what it was) swooped low over top of me and I thought he was going to hit me in the head! He was hot on the trail of a bunny in the neighbors yard, but the rabbit run under a car sitting in the yard and the hawk missed! That was quite an experience!

While sitting outside with our morning coffee I got these shots of a momma and baby robin! She was pulling bugs out of the ground and feeding it. I wasn’t able to get a shot of that. Once she was aware of me she was too busy keeping her eye on me. The little one stayed a few steps just behind her at all times.

We’ve had tons of house sparrows this last week too. Their new to the backyard. My Merlin bird app says they are uncommon to my area. They seem to stay in small flocks and the feeder has been mobbed with them this morning! The poor finches have had to vie for space at the feeder. Of course when I went in to get the camera I disturbed them and by the time they started coming back my battery was blinking low. Only got a couple shots and they aren’t very good. I’ll try later to get a shot of the mob feeding.  Female on top, male on bottom…

Here’s what the Merlin app said about this bird…

Widespread and abundant in cities, neighborhoods and farms. Avoids dense woods. Flocks cluster in dense bushes, bustling around and chattering to one another. Males have smart black bibs, bright rufous napes, and stunningly patterned wings with brilliant buffs and browns. Underparts are pale pearly-gray. Females are plain brown with cute face and lighter eyebrow. Native to Eurasia; introduced to North America and not closely related to other sparrows there.

I got up to take a couple shots of the mountains out front and the whole flock took off and flew through the carport and almost hit me in the head!  It’s very cloudy and dreary today. We’ve had rain since Sunday night. I love the way the clouds wisp around the mountains.

This is my pecan tree where all the bird action happens, the suet feeders are hidden by branches…

This afternoon we heard so much racket from birds in the front and went out and looked and there was a bunch of barn swallows out front. They were perched on the electric lines and flying around and a bunch were down on the road laying on their bellies on the hot asphalt! Strange indeed. Small groups were in the lawn eating insects. This is a first! I found it fascinating. They are only here in the States in the summer for breeding, then they go south of the border.

I found this great app for bird lovers yesterday. It’s put out by the Cornell Lab for Ornithology. They have a great website too. Click the link to check it out!

Here’s the photos I took today…

A house wren has nested in my one birdhouse for two years now. This year I actually got to see the babies in there! Not really sure how many there are. I heard them before I saw them. They seemed to be up high behind all the nesting material. I’ve been sneaking over and peeking in on them since I heard them. A couple of days ago I saw their tiny beaks and momma has been so busy back and forth feeding them. I tip-toed up with the camera on Sunday and got a few nice shots…

We were sitting outside a little later on and I was keeping an eye on them with the binoculars and one little guy thought he was Captain America and was sticking his whole body way out there and then it happened… he took a nose dive all the way to the ground!

I couldn’t believe my eyes! I ran over and checked on him. He was alive and so tiny. He could barely walk let alone fly. I scooped him up and yelled for Bossman to bring me a stool and we put him back in. I was so relieved when I saw momma back and forth feeding them again. I wasn’t sure if my scent on him would disrupt anything. Hopefully he doesn’t try anymore acrobatic stunts!
Meanwhile the catbird we hear in the trees finally showed up at the feeders. They really do sound like kittens mewing! He has a long tale and had it all fanned out while he was eating. By the time I got the camera he had pulled it in so I didn’t get it fanned in the shot…

The blue jays have really been a nuisance this year, eating all the seed as fast as I can put it out. One morning recently I counted eight of them out there feasting! The starlings have competition this year!

I have five feeders now and two suet feeders and we have so many birds it’s unbelievable! One day in particular the competition at the feeders was hot and heavy. A downy woodpecker and a starling were in fierce battle over the suet and the woodpecker wasn’t going to let the bully starling get away with hogging it, he fanned out his wings and squawked and fussed until the starling left!

You can see the feeders are empty all ready! I fill them each morning as soon as I get up.

Recently we spent a week in Myrtle Beach, South Carolina. It’s not one of my favorite places, but Bossman loves all the golf courses. We had rain and wind and the temps were on the mild side. Did some shopping, played miniature golf and spent the day in Georgetown, South Carolina’s third oldest town. Lovely place with an interesting museum on rice growing. I’ll have some pictures later of Georgetown. Today I wanted to show you three birds I saw while there.

Least Tern: likes sandy and pebbly beaches and sandbars in large rivers. Nests in colonies. We saw them at Barefoot Landing which is a shopping complex built on stilts over a body of water. Perfect for feeding on minnows or other small marine organisms.

Great-tailed Grackle: this bird resides mostly in California, Colorado, Kansas, and western Louisiana southward. Seeming to be extending its range eastward not yet reaching Florida and here it is in South Carolina!

The female is brown…

Saw lots of turtles too…

I meant to tell you about this last post. I saw the idea on Facebook.  Helping the birds build their nests! It was such a glorious day on Sunday I sat outside and cut yarn. Then I got dryer lint and some hair from Bossman’s beard brush. I put it all in a suet feeder and hung it in the trees. We’ll see if they use it. It sounded like a good idea.