by Georgette Heyer
published in 1942 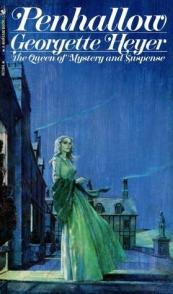 The death of Adam Penhallow on the eve of his birthday seems, at first, to be by natural causes. He was elderly after all. But Penhallow wasn’t well liked. He had ruled over his estate with an iron will and a sharp tongue. He had played one relative off against another. He was so bad-tempered and mean that both his servants and his family hated him.

It soon transpires that far from being a peaceful death, Penhallow was, in fact, murdered. Poisoned. With his family gathered to celebrate his birthday, and servants that both feared and despised him, there are more than a dozen prime suspects. But which one of them turned hatred into murder?

This was definitely not what I expected from Georgette Heyer for a mystery. It is quite different from others I’ve read from her. It is 298 pages long and by the time I got to around page 150 and no murder yet, just nasty, unlikeable characters I told Bossman I think I might have to give up on this one. The only thing that kept me reading was the front page intro…

WE ARE BOUND TO SECRECY

The Central Situation,
The Plot Development,
The Astounding Solution of

are so fresh and unusual, so arresting to the mystery fan that we are pledged to reveal nothing in our promotional copy about this unique novel – other than this indisputable fact:

Georgette Heyer
has never devised a puzzle so crafty,
an ending so unexpected.

The actual murder doesn’t take place until chapter sixteen which starts on page 191. We know right up front who does it. This is more a psychological thriller than a traditional mystery for sure. A character study of a very ugly, dysfunctional family. Honestly there wasn’t a pleasant thing or person in it. It’s dark, moody and unpleasant. I was left with a heavy, sad feeling.

Having said that, it was well written and the characters well drawn and delved into. I had a good time trying to determine who I thought was going to be the murderer if we ever got to the murder! Would I recommend it? Sure, just go into it knowing this is not the usual fare you expect from Heyer’s mysteries. I’d love to know what you think of it if you’ve read it or do read it.

This fulfills the ‘statue‘ category on the Gold Vintage Cover Scavenger Hunt @ My Reader’s Block. That puts me at 9 on this card!

Brother and sisters Peter and Margaret Fortescue and their married sister Celia Malcolm inherit a rambling old house from an uncle. The house has been empty for a while. A charming house full of history, originally a Priory (monastery of men or women under religious vows that is headed by a prior or prioress), BUT said to be haunted by a monk! The uncle never even lived there himself after he inherited it from a relative, but chose to live far away from it!

Celia and her lawyer husband, Charles, Peter, Margaret and no nonsense Aunt Lillian come to stay at the house and decide for themselves if it is worth fixing up and keeping. At first the things that go bump in the night and the whispers and fears from people in town have them on edge. But levelheaded Peter and Charles think there is more to this haunting then meets the eye and are determined to get to the bottom of it. Whose afraid of a little old ghost? That is until a murder is committed!

Who could be behind the strange goings on and why?
The strange neighbors, Mr. Duval, the drunken artist who obviously is crazy and says he’s seen the Monk and is terrified. Mr. Titmarsh, the eccentric moth collector who is so intent on his prey he forgets to pay attention to who’s property he roams around on at all hours of the day and night. Or Colonel Ackerley, the only one in the bunch that seemed to have his elevator going all the way to the top floor? Then there’s Michael Strange, supposedly a visitor on vacation but why does he keep showing up in the most suspicious places and what kind of hold does he have over Margaret? You can see there are lots of great characters floating around in this ghost story!

I enjoyed this first, for me, read by Georgette Heyer. The old house (full of secret passages by the way!), the detail, the wonderful characters, well thought out mystery full of  subtle humor all made for a roaring good time! I’ll be looking for more by this great author!