If, like me, you read the reprint of Farjeon’s Mystery in White last year and fell in love with his writing, you’ll be glad to know Harper Collins is releasing new editions of his Ben the Tramp series this October!

Ben was first introduced in Number 17, originally a play written by Farjeon and later turned into a book. The first original novel featuring Ben was then, The Detective Clubs, The House Opposite. He is a cockney tramp, ex-sailor in the merchant marines who finds himself solving murders.

Four of the novels featuring Ben will be released on October 25th this year with the rest to follow next year. The Detective Club edition of The House Opposite will be released next month. You can check these out and pre-order them HERE.

On a fine autumn weekend, Lord Aveling hosts a hunting party at his country house, Bragley Court. Among the guests are an actress, a journalist, an artist, and a mystery novelist. The unlucky thirteenth is John Foss, injured at the local train station and brought to the house to recuperate – but John is nursing a secret of his own.

Soon events take a sinister turn when a painting is mutilated, a dog stabbed, and a man strangled. Death strikes more than one of the house guests, and the police are called. Detective Inspector Kendall’s skills are tested to the utmost as he tries to uncover the hidden past of everyone at Bragley Court.

This country-house mystery is a forgotten classic of 1930s crime fiction by one of the most undeservedly neglected of golden age detective novelists.

I really enjoyed this fun mystery! Loads of interesting characters and possible suspects. I especially enjoyed the banter between the artist, Pratt, and the journalist, Bultin. Sneaky blackmailer, ruthless politician, simpering actress and strong, gorgeous socialite among the guests. And poor John Foss, the stranger from the train station, laid up in the ante-room on a couch missing all the action but hearing everything! Inspector Kendall is a grand detective and the culprit was not who I thought! I never would have guessed this one. Good puzzler and several sub-plots woven in!

After the disappointment that was The Z Murders I was really pleased with this book. Mystery in White was not the odd one out it seems!
Warning for animal lovers, a dog does get killed in this story. Very sad, but thankfully not described in any detail! In the summing up of the chain of events when Inspector Kendall gets to the bit about the dog he states: ‘The death of a dog may not by some be regarded as a tragedy, but some dogs are more worthy than some men, and can be more justly mourned.’
I highly recommend you try a J Jefferson Farjeon novel if you love mystery!
Here’s a sample from the book:
“I don’t kill,” said Pratt. Then he recalled the moment when he had seen red in the passage, and again when he had found himself trembling in the studio. He held up his hand. It was perfectly steady. He smiled. “No; I don’t kill. The murder may appear in Miss Fermoy-Jones’ shocker, but it won’t be reported in Monday’s newspaper. I’m afraid I won’t be giving you that paragraph. Just the same, Lionel,” he went on contemplatively, “theres a lot beneath a quiet surface. The person who spoilt my picture may have been a quiet sort of person. He may have been more surprised than any one at his action. A sudden moment of passion, eh? A sudden dizziness? It can happen.” He raised a slender finger. “Listen! Dead quiet, isn’t it? Not a sound! But if we could really hear, Lionel? Storms brewing in the silence? There’s silence in the passage outside this door here – silence in the hall below – silence on the lawn, silence in the studio – silence in a room where an invalid lies. A brooding silence, my boy – that’s not going to last!”
Thanks to Poison Pen for allowing me the chance to read this book for my honest review!
Peggy Ann 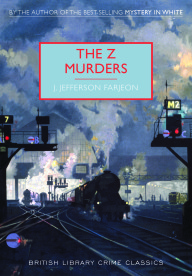 ‘Richard Temperley arrives at Euston station early on a fogbound London morning. He takes refuge in a nearby hotel, along with a disagreeable fellow passenger, who had snored his way through the train journey. But within minutes the other man has snored for the last time – he has been shot dead while sleeping in an armchair. Temperley has a brief encounter with a beautiful young woman, but she flees the scene. When the police arrive, Detective Inspector James discovers a token at the crime scene: a small piece of enamelled metal. Its colour was crimson, and it was in the shape of the letter Z. Temperley sets off in pursuit of the mysterious woman from the hotel, and finds himself embroiled in a cross-country chase – by train and taxi – on the tail of a sinister serial killer. This classic novel by the author of the best-selling Mystery in White is a gripping thriller by a neglected master of the genre.’

A rollercoaster ride of 48 hrs. on the trail of a serial killer. It was love at first sight for Richard Temperley and he was determined to find the girl from the hotel and do whatever he could to help her and keep her safe. Three murders plus in just 48 hrs.! In a race against the police to find Sylvia first and a cat and mouse game with the killer to keep her safe, will Richard solve the mystery and get the girl? Richard takes us on a winding, frantic search from town to town. Will the police figure it out in time and be there when he needs them?

Having read and loved The Mystery in White by Farjeon I was delighted to get a chance to read this one.  Not as good in my opinion, the ‘mystery’ of what was done specifically to the killer by the person he was after wasn’t explained enough for me. But an excellent, tense, read to the last page, good mystery! I highly recommend Farjeon and British Library Crime Classic, which we can now get here in the US through Poison Pen Press! Thanks!

The British Library Crime Classics reprints have beautiful covers and I really love this one. It makes me want to get a mug of hot cocoa and curl up in a big chair with it. Doesn’t it you? The original book was published in 1937.

This book has a foreword by Martin Edwards, author of the Harry Devlin and Lake District series. He does a wonderful job and makes you want to dig right in!

back cover:
‘The horror on the train, great though it may turn out to be, will not compare with the horror that exists here, in this house.’

On Christmas Eve, heavy snowfall brings a train to a halt near the village of Hemmersby. Several passengers take shelter in a deserted country house, where the fire has been lit and the table laid for tea – but no one is at home.
Trapped together for Christmas, the passengers are seeking to unravel the secrets of the empty house when a murderer strikes in their midst.

The whole story takes place on Christmas Eve and Christmas Day. The main characters are five passengers from the snowbound train. A mild, nervous male clerk on his way to his aunt’s for Christmas, a chorus girl, an elderly bore (with an eye for the chorus girl), a brother and sister team, and an elderly man who is a paranormal investigator. Another man, Smith, shows up. Was he on the train too? Why is he so secretive and hot tempered? Why is the tea laid, fires burning and no one there? Why is a knife laying on the kitchen floor?

This was a great read! Murder, mystery, a hint of romance, a blizzard, a deserted manor house and humor. A must read for a cold winter day. Reviews at The Passing Tramp and Past Offences made me HAVE to get this book. Thanks guys! I want to read more of Farjeon for sure! And it looks like there is plenty…