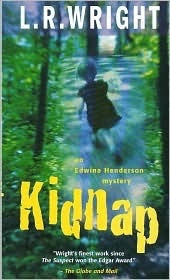 Samantha is a solitary, quiet five year old, left by her grief-stricken father in the care of an aunt and in the company of a resentful cousin. Samantha’s every move is being watched by Susie Wilson, a sixty year old woman tortured by feelings of loneliness and despair. Spurred on by Arthur, her bumbling but unscrupulous accomplice, Susie steals Samantha away in a dramatic act of revenge.

The task of unraveling the intricate ties that bind this most unlikely criminal to her young victim falls to Sergeant Edwina “Eddie” Henderson. Following the retirement of beloved Staff Sergeant Karl Alberg. Eddie assumes the helm of the RCMP detachment in Sechelt, a sleepy town on B.C.’s Sunshine Coast. Eddie must battle to gain the respect and confidence of those who now work under her. Never one to shy away from a challenge, Eddie makes bold and unpredictable decisions, keeping her detractors on their toes. But above all else, Eddie is determined to put together the pieces of a complex psychological puzzle in time to find the missing Samantha.

This is the first in the Edwina Henderson series. Picking up after Staff Sergeant Karl Alberg leaves Sechelt in the Karl Alberg series.

Several reviews on Goodreads said they found this book slow. I quite enjoyed it and got it read in 2 days. It held my interest and I was curious to find out all who, what’s, and why’s. I like Sergeant Eddie Henderson and look forward to more books in the series. I think L.R. Wright does character development very well and always enjoy her characters.

I’m doing my posting on the iPad using the Blog Press app, while I’m in Scotland. Please excuse my somewhat unevenly proportioned post!

‘In this, L.R. Wright’s first mystery novel, we are introduced to RCMP Staff Sergeant Karl Alberg; and so begins the highly-acclaimed series featuring Karl and librarian Cassandra Mitchell.

At eighty, George Wilcox hardly expected to crown his life by committing a murder. It had happened so quickly, so easily, so unexpectedly in the sleepy town on the Sunshine Coast of British Columbia:  a near-perfect crime that wraps Wilcox in a web of guilt, honor, and secrets of the past.  An unprovoked act that soon binds him to the warmhearted town librarian, Cassandra Mitchell, and her new romantic interest, zealous Staff Sergeant Alberg.  Together, this troubled trio find themselves caught up in a crime whose solution transcends the logic of pure justice.’

I first heard of this book and series from a review by Tracy @Bitter Tea and Mystery. It sounded so good I ordered it immediately from Paperbackswap and read it in one day! I just ordered book 2 in the series!

This mystery is set on the west coast of Canada along the ‘Sunshine Coast’. (There is a link to a map of the area in Tracy’s review). Our detective is a Royal Canadian Mounted Policeman. Different for me. Also different, the story opens with the murder and we know who it is from the get go. Question is why and will he turn himself in or will Karl figure it out?

I couldn’t put it down. I loved George and Cassandra. I HAD to find out what happened all those years ago when George was young and why he hated Carlyle so much. The murder changed everything for George. His whole life and what he believed was turned upside down. Had he been wrong all those years? I wanted to go to the ‘Sunshine Coast’ and go to Cassandra’s library. Karl seemed a little offish but the stray cat gives us a clue to what is really at the heart of this tough Mountie. I will tell you, the end had me crying. Maybe I’m just a big softie:) A totally satisfying read.

There are 9 books in the series with Alberg and in the last one he retires and Sgt. Edwina Henderson takes his place and there are two more books featuring her. That’s quite different too!

Check out the order of the series here

L.R. Wright has once again written a novel glowing with ­ as Anne Tyler has described it ­ “a special kind of integrity.” The Suspect builds with such natural grace and compassion that it transcends the logic of justice. Wilcox, Alberg, and Cassandra will all come to make startling decisions, but Wright’s sympathetic affection for these characters infuses their story with reason. So skilled a writer as to make Wilcox’s crime seem wholly unremarkable, L.R. Wright transforms the daily course of life into something quite extraordinary.  (from her website)

“Every bit as good as the novels of Ruth Rendell and P.D. James.”
– People