Penelope Fitzgerald wrote: ‘If I could have back one of the many Winifred Peck titles I once possessed I would choose House-Bound. The story never moves out of middle-class Edinburgh; the satire on genteel living, though, is always kept in relation to the vast severance and waste of the war beyond. The book opens with a grand comic sweep as the ladies come empty-handed away from the registry office where they have learned that they can no longer be “suited” and in future will have to manage their own unmanageable homes. There are coal fires, kitchen ranges and intractable husbands; Rose is not quite sure whether you need soap to wash potatoes. Her struggle continues on several fronts, but not always in terms of comedy. To be house-bound is to be “tethered to a collection of all the extinct memories… with which they had grown up… how are we all to get out?” I remember it as a novel by a romantic who was as sharp as a needle, too sharp to deceive herself.’

I read Persephone reviews on the blogs and always think I would love to be able to get my hands on some. They are not easily come by here in the States in bookstores. A friend gave me two copies a couple of years ago. Jessie’s Persephone Readathon @ Dwell in Possibility, the first eleven days of February gave me the push to get started on one. Sadly it took me longer than eleven days to read it. I finally finished it on the 19th!

I enjoyed the book. It was a fun look at ‘genteel living’ and the loss of their way of living. It was slow though and didn’t call to me to pick it up and I found myself doing other things than reading.

Because of the war there is a shortage of women available for ‘house work’. At the agency where the ladies sign up for house help, Rose hears the desperate lady in line in front of her say, ‘You’ll not be expecting me to manage my house myself!‘ and Mrs. Loman reply, ‘I don’t know why not! Millions of women do just that, Mrs. Lunga!‘

Rose greeted Mrs. Loman at the counter when it was her turn with, ‘That’s true, of course!’ It’s perfectly true that millions of women do, and I suppose we should imitate them, but then, of course, they haven’t all got basements!‘ Rose left the agency determined to do the house work herself! Why shouldn’t she be able to do what millions of other women do! After all there was a war on and she needed to pull her weight! Her friend Linda was appalled at the thought that Rose was going to undertake this job herself. ‘Darling Rose, you have gone Bolshie and no mistake. Think how we’ve been rocks and props to our husbands, and entertained their friends, and made a Home with a capital H.’  But Rose had made up her mind… ‘You can’t say we’ve justified our existence in the world by sitting on committees, or even by having a few babies as comfortably as possible.’

I liked Rose’s spunkiness in pitching right in and doing the hard work. It was a bit hilarious watching her learn to cook and dust and scrub and how hard she made the job. Of course the story also told us the families inter-workings and I liked peeking in on the relationship dynamics in a blended family. We even get a peek at Rose’s spiritual life as she wrestles with her new ‘call’ in life. Even though it took me a longer to read it than it should, I felt satisfied at the end of the tale. I would definitely read more by Peck. I especially would like to find her one and only mystery, Arrest the Bishop?! 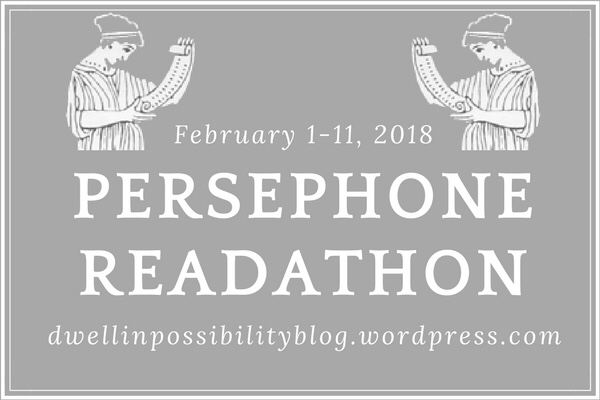 I missed day one! Argh! Don’t cry over spilt milk, on to day two…

Persephone Readathon Photogenic Challenge. I only have two Persephone books 😩

<<<<
have several ebooks from the public domain. But your right, Persephone editions are addictive! I'm on the hunt now for all I can get my hands on!

Like many of you, blogging is where I first came to hear about these books. I live in the US and they are not easy to come by here.

I'm going to read House Bound by Winifred Peck. If I’m realistic I’ll only get the one read, but one can live in hope! Yesterday wasn’t a good reading day as we were busy. I didn’t even get one chapter finished, but I did dip in. Bossman is going on an overnight retreat this weekend so I’m hoping to get lots of reading done! Looking forward to seeing what everyone reads.