by Michael Innes
originally published in 1981 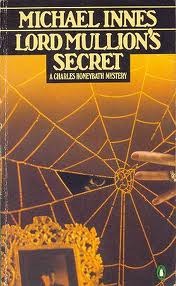 When Honeybath travels to Mullion Castle to paint a portrait of Lady Mullion (the wife of an old school friend), he finds himself in the midst of a delightfully eccentric family – and some rather intriguing puzzles. Who, for example, has removed the valuable miniature portrait of Lord Mullion’s ancestor – and why? Can it be connected in any way to the recent appearance of some long-forgotten sketches drawn by Lord Mullion’s dotty Great-anut Camilla? And just how does the handsome young gardener (a bit more ambitious than his station seems to warrant) fit into the mysterious happenings?

Honeybath addresses himself to these and other teasing problems in this witty, engaging, and surprising tale of aristocratic idiosyncrasies and secrets that only Michael Innes could have conceived.

Enjoyed this immensely! No murder, just an intriguing and captivating mystery or series of small mysteries adding up to the great reveal! Full of fun quirky people. Honeybath is a wonderful character and I’d love to read more featuring him.

He is a portrait painter and thus there is much mentioning of artist, real ones that were fun to look up. Most interesting, we are introduced to a diarist from the late 1800’s who Honeybath considers a landscape artist as his diary paints such a lovely landscape with words…

‘After the rain it was a flawless late afternoon to which the earlier downpour had lent the enchantment of a sparkle of moisture scattered like Constable’s snow over the scene. Francis Kilvert, he felt, that superb landscape-painter manqué, might have done justice to it in his incomparable diary. Many of Kilvert’s favorite effects were on view: in the distance bluish hills; nearer at hand the shadows of great trees elongating themselves on the grass; numerous contented kine; here and there less numerous rustics making their unassuming way home after the labors of the day; the glint and murmur of a half-hidden stream. Presently would come still Evening on, and Twilight gray would in her sober livery all things clothe. All in all, it was a peaceful scene, admirable adapted to mild literary musings of this sort.’

Seems Kilvert‘s diaries were printed in part and a BBC TV series made of them in the 1970’s. He sounds like a fascinating man, a vicar who loved swim and sunbathe in the nude! He died of peritonitis very young at the age of 38, just a few days after returning from his honeymoon. I found used copies of one of the diaries at Amazon! Go HERE if your interesting in getting a copy. If you want to read more on him you can visit The Kilvert Society.

Another interesting person named was an old French comedian, Little Titch. I found a video of him performing!  And an author I have not heard of, Ivy Compton-Burnett. An English novelist, she wrote from 1911-1963. I’d love to read one of her books. One of the painters he mentions in the above excerpt, John Constable, was a landscape artist and you can see some of his painting HERE. They are lovely!

This locked room puzzle mystery was written in 1936. It is an academic mystery. Michael Innes was a Lecturer and Professor of English and lived the academic life from 1949-1973. Mr. Innes was born John Innes Mackintosh Stewart in 1906 in Edinburgh Scotland. Having many literary criticisms and contemporary novels published under his own name he also wrote crime novels under the pseudonym Michael Innes. Most of his crime novels include Inspector Appleby. Death at the President’s Lodging is the debut of Appleby.
Not only is the author of this book from Scotland but the book is from Scotland! Sent to me by my good blogpal Katrina. Thank you again Katrina!
This was my first academic mystery. I have to be honest and say that it really isn’t the setting for me. The story was very well written and the puzzle was excellent. Quite convoluted, although I had picked the right guy for the murderer I never would have thought of how it all happened. I just didn’t care for the ‘professors’ as characters. I did like Appleby and his sidekick Dodd. I have another Appleby on the shelf and will read it soon.
With these vintage books, it’s hard to actually get a copy in your hands to look at and read the synopsis. At least for me it is, we have not one used book store near me:( I have to rely on online purchases for mine. So I am going to just give you the synopsis on the back cover of this book.
‘Just beside the President’s grotesquely muffled head lay a human skull. and over the surrounding area of the floor were scattered little piles of human bones.’

Inspector John Appleby has a difficult and delicate task when he investigates the murder of the unpopular Josiah Umpleby of St. Anthony’s College. The crime is at once intriguing and bizarre, efficient and theatrical – and, intellectually, it is the most challenging crime of his career. For Appleby must pick his way through the malicious gossip and learned squabbles of the college’s brightest academics and sift through an embarrassment of clues – genuine and planted.

But with the unexpected aid of three precocious undergraduates and the St. Anthony’s burglar a subtle killer is unmasked and the devious dons find that the oddest thing about the case is Appleby himself…
Here is a nice annotated book list Michael if you are interested in looking over his books on the Grobius Shortling Mystery Novel Site