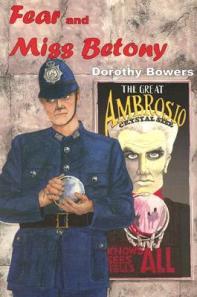 Emma Betony was content to live out her remaining years in a home for decayed gentlewomen when she receives an urgent appeal for help from a former student. Grace Aram is running Makeways, a struggling boarding girl for girls, newly relocated in a former nursing home in dorset far from the falling German bombs.

But Grace isn’t interested in Miss Betony’s teaching skills. she needs someone she can trust to expose the culprit behind a series of troubling events, including the possible poisoning of one of the two remaining nursing patients. What Miss Betony finds is an overwhelming sense of fear on the part of the Makeways’ inhabitants.

Miss Betony follows a series of clues that eventually lead her to The Great Ambrosio, a charismatic, extremely handsome fortune teller with more than one trick up his sleeve.

First published in 1941, Fear and Miss Betony makes the final appearance of Inspector Dan Pardoe. But it is Miss Betony herself who fights through fear and solves the case. contemporary critics immediately proclaimed the book an instant classic, with two-time Edgar-winning critic James Sandoe including the book in his Readers’ Guide to Crime (1944), one of the earliest – and most astute – lists of the best books in the genre.

This is my third Dorothy Bowers book and I’ve enjoyed each one of them! There are two more I need to find. She died young, 46, and it was a great loss to mystery readers. Good clues among red herrings and dramatic wrap-up! The tension was palpable.

This one counts for Bev’s Vintage Cover Scavenger Hunt Gold Era – policemen on the cover. 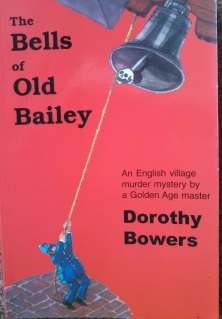 Scotland Yard looks into the connection between five suicides in Long Greeting and Miss Tidy, the white-haired owner of the village teashop.

‘It was not until the fifth death in Long Greeting that Miss Tidy made up her mind to go to the police.’
The owner of the Minerva, a combination hat, tea, and beauty shop, Miss Tidy is a tiny, white-haired lady whose Dresden-doll daintiness conceals a cold and calculating heart. As everyone in the village is quick to point out, she is not a person who inspires affection in others.
Five people had died in Long Greeting and its environs in the past months, all by their own hands, and their deaths are the talk of the small village. Although Miss Tidy doesn’t realize it until she makes her statement to the police, Detective-Inspector Raikes of Scotland Yard has already been called down to Long Greeting to work with the local constabulary, in particular Superintendent Lecky. The villagers don’t take kindly at first to an outsider in their midst, but as poison-pen letters and then murder follow upon the inexplicable suicides, they gradually begin sharing their secrets with Raikes and Lecky, until finally the sharp-witted detectives are able to make some sense of the puzzling events.
A superb example of the classic English village mystery, The Bells of Old Bailey is the last book Dorothy Bowers published. She died at the age of 46 of tuberculosis the following year, 1948, shortly after her induction into England’s prestigious Detection Club.    (back book cover)

This was an excellent read! Many red herrings, very convincing ones too that make you uncertain when you think you have it all figured out. The village of Ravenchurch was a typical English village and it’s Superintendent Lecky was loath to think any of ‘his’ people could do such terrible things. But in reality Ravenchurch became a pool of hateful, mean people!

Delicious secrets, blackmail, nymphomania (yes, in a 1947 book!) greed, hatred and murder. Two of the quirky characters were Mrs. Weaver the bookshop owner and Miss Beaton the mystery novelist, my favorite character of course!

Here’s a quote from Mrs. Weaver when Inspector Raikes was trying to get information about Edith Drakes from her…
“Dear me, people are very indifferent, though I don’t suppose they mean to be. ‘Laugh, and the world laughs with you.’ I am myself, if it come to that – seemingly indifferent, you know, though not callous. It comes not so much from not caring as from being unobservant. I just can’t see what goes on under my nose. Books segregate one a good deal, I’m afraid. So I don’t know that I can help much. Edith Drake spent a long time with my books, but she didn’t confide in me.”

Dear Anthony Trollope got a mention too…
‘Raikes studied her. “Such remarkable precision of habit makes for longevity.” was his assurance. “And Mr. Greatorex? Is his practice as regular?”
“Of course. That is the foundation of his success. He has a great respect for Anthony Trollope, who, he tells me, was very careful to observe a timetable of work and relaxation.”

This is my second Dorothy Bowers mystery and I enjoyed it even better than the first. It’s a shame it was her last. I have one more on my shelf to read. Rue Morgue republished several of her books. I adore Rue Morgue books!

This book counts for Bev’s Scavenger Hunt 2016 Gold, published before 1960 and fulfills a skull on the cover. The dinger on the bell is a skull!

Back cover:
‘The Victim knew the identity of his potential murderer but the clues he left behind were too obscure even for Inspector Dan Pardoe of Scotland Yard.
Three times young Archy Mitfold escaped murderous attacks. Knowing the identity of his would-be killer and anticipating further attempts, he contrived to leave behind clues that would lead Scotland yard to his killer’s door-step. Of course Archy thought himself clever enough to avoid actually being murdered and assumed these clues – mostly bird sketches – would never actually be needed. Archy was wrong.
Unfortunately for Inspector Dan Pardoe and Sergeant Tommy Salt, Archy’s clues were so obscure that they defied interpretation. World War II was only weeks old and it looked like Archy’s brief flirtation with the pro-Nazi Nordic Bond might be behind his murder. Anti-German feelings were at their height during this ‘phony war’ period as Londoners blacked out their windows to German bombers that were months away from attacking. On the other hand, Archy’s death also seemed somehow connected to the disappearance of a camera-shy British philanthropist. It will take all of Pardoe’s celebrated ingenuity to nab the killer.’

Very ingenious complex plot! Good police work, solid characters. Two mysteries in one. It certainly was not the culprit I thought it was! Hint: if your a bird lover you might be able to figure this one out!

Check out this great review over @ Pretty Sinister Books
and find out about this author, who’s life was cut way too short by tuberculosis, HERE